Are you ready for a sexy Romantic Suspense? RED HOT and DANGEROUS is releasing May 1st, exclusively at Amazon for only 99 cents! Here’s the blurb:

When Andie Lange accepts a one day temp job through her friend’s employment agency, she unwittingly brings back more than a paycheck. 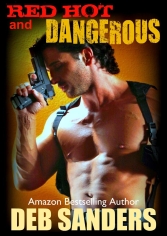 It’s supposed to be a “fun” assignment – assisting a famous actress during a publicity junket, as well as an opportunity for Andie to network her new photography business. But between the Promotions Manager accusing her of spying for the tabloids and the unwanted advances from a handsome stranger, the day proves to be more trouble than it’s worth.

Unfortunately, things go from bad to worse. The actress is poisoned, and  the handsome stranger turns out to be investigating detective, Drake Slater, who is assigned protective duty when attempts are made on Andie’s life. She’s connected to the murder – she just don’t know how or why.

There’s no denying Drake Slater is a cool drink of water on a hot day but the man is a womanizer. Andie recognizes his charm for what it is . . . a way to seduce her. So why isn’t she putting up more of a fight ?

Drake Slater learned a long time ago police work and relationships don’t mix, but that hasn’t stopped him from enjoying the company of  beautiful women. The key is not to stick around long enough for them to get any ideas. His plan works flawlessly until he meets Andie Lange, a gorgeous redhead with legs that go all the way up to heaven. Forced to protect her from an unknown assailant, Drake discovers there’s more to the sassy photographer than her body.

After Andie’s photographs reveal the identity of the murderer,  police rush to make an arrest, only to discover he’s been killed, too. Realizing the assailant’s next target is Andie, Drake must take extreme measures to keep her safe.

With her life in jeopardy, the only thing Andie fears more than the killer is the heat of desire aroused by her bodyguard. She’ll need to keep her wits about her and take a lot of cold showers if she’s to survive . . . because Drake Slater is RED HOT and DANGEROUS!