I’m always on the lookout for unusual sights, urban legends or myths to inspire my short stories so as soon as we set up camp in a new location, I make it a point to ask the locals where I should go. While camping near Maumelle, Arkansas this summer, one of our neighbors suggested I check out The Old Mill at T. R. Pugh Memorial Park in Little Rock.  All he would say was the site had been filmed for the opening credits of Gone With The Wind and it was amazing. 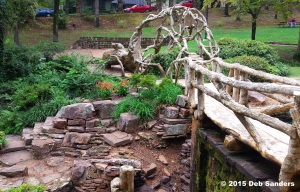 Okay, sounded interesting although not the lore I usually research but I was bored so off we went with Jake in the back seat. Our retriever is a well mannered dog and attracts a lot of attention wherever we go . . . which he loves. Unfortunately, on this particular day Little Rock was in the midst of a brutal heat wave and Jake was feeling it. When we parked in front of the idyllic park setting – water, green lawns, flowering trees and shrubs – I noticed a sign which read, “no pets allowed.” It was too hot even in the shade to leave the Jakester in our vehicle. I resigned myself to leaving until Hubby, being the wonderful, accommodating soul he is, volunteered to pet sit  in the air conditioned truck while I explored The Old Mill. [Hmmm . . . looking back now, I question his motives.] 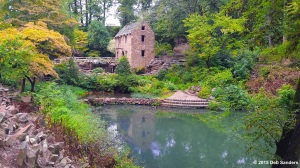 As I passed through gates flanked by large rock walls and shaded walks, it was like stepping back in time. Tangled vines formed an arch over a footbridge stretching across a small pond. On the other side of the walkway stood a two-story rock mill house with a water wheel churning green blue water. Azaleas spilled across the grounds and beside meandering paths. I can imagine how gorgeous the setting is during spring when the shrubs are in full bloom.

At that moment, I was content with the day’s excursion but it got better. As I eased through the massive portal of old vines, I trailed my fingers across the gnarled surface, marveling at the polished wood. Except it wasn’t wood. Ah ha, there IS a quirky tale here, after all!

The tumbling vines, wooden planks, bridges and more were crafted from concrete in the early 1930’s by a premier sculptor of faux bois (fake wood), Dionicio Rodriguez. Justin Matthews, developer of the Lakewood Community in North Little Rock, ran across the artist’s work while  visiting Mexico City. He then learned Dionicio had relocated to San Antonio and began a quest to find him. With the help of an interpreter, Justin negotiated sculptures for three of his projects, T.R. Pugh Park being one. Dionicio’s magnificent creation caught the eye of film maker, David Selznick who used the site in his movie, Gone With The Wind.

There are some historic aspects to the site, as well.  The grist mill’s first floor dates back to 1828. Two original mile stones were moved to the site from a road  laid out more than 150 years ago, and used by the Cherokee and Choctaw to travel from Dardanelle, Arkansas to Oklahoma. Three sections of a wrought iron shaft were cut from the stern wheel of an 1800’s passenger steamboat.

But it was eccentric actions of Dionicio Rodriguez during the construction phase that provided inspiration for one of my stories in the soon-to-be-released anthology, Tales From The Back Roads.

Dionicio hired helpers to assist with building the concrete footings and underpinnings of the project, however he never shared the process behind his artistic methodology. It is said he mixed products in the trunk of his car, slamming it shut if anyone approached and even breaking jars or peeling labels to keep his ingredients a secret. He used a variety of objects to re-create the texture of wood such as spoons, forks and tools he handcrafted himself, perfecting the technique so well, he managed to fool the most discerning eye. Everything “wooden” in the park, including a huge bridge spanning an adjacent lagoon, is crafted in faux bois.

After learning of the eccentric way the artist worked, my imagination began to churn faster than the water wheel next to the grist mill. What obscure motive drove Dionicio to keep his processes and mixtures a secret? Were there illicit or illegal ingredients in the preparation of his product? Did he have an unseen force instructing him? Could he have hidden something in the concrete structures? Body parts, perhaps?

And that, dear readers, is how inspiration for a short story begins . . .